How to Tie the Wooley Bugger

30 Mar How to Tie the Wooley Bugger

Posted at 14:58h in Fly Tying, How to videos by Mike Stack 0 Comments
0 Likes
Share

In this video tutorial I demonstrate how to tie the Wooley Bugger. Next in our video series of basic, tried and true fly patterns every fly fisher should carry and know how to tie.

The Wooley Bugger is credited to Russell Blessing who came up with the pattern back in 1967 to resemble the crayfish, leeches, large nymphs, hellgramites and Dobsonfly Nymphs found in the streams of eastern Pennsylvania. Believed to be derived from the Wooley Worm which is a variation of the Palmer Fly (dating back to Izaak Walton) the Wooley Bugger is arguably responsible for catching more trout than any other fly in the world!

Categorized as a streamer or wet fly the Wooley Bugger is constructed with a blood quill marabou tail, roughly the length of the hook which has been wrapped with 10-12 turns of .035 lead wire. Chenille is tied in in front of the tail along with a piece of wire rib to counter wrap the Schlappen. The chenille is wrapped forward just behind the eye. The Schlappen or webby saddle hackle is then palmered forward to just behind the eye, followed by counter wrapping the rib through the Schlappen to reinforce the hackle stem. I tie them in black, brown, olive, white, yellow and even purple. Sizes #10-2. Variations of the Wooley Bugger are infinite but include the Beadhead or Conehead Bugger, The Krystal Bugger, The Bow River Bugger, The Yellow Yummie. 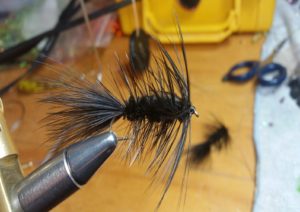 Materials to tie this fly can be found at Feather Craft Fly Fishing or your local fly shop.